Jane Austen’s beloved classic, Pride and Prejudice was published on January 28th, 1813. The Jane Austen House Museum is celebrating with a year of festivities, including an exhibit which contains a letter from Miss Austen to her sister Cassandra upon her receipt of her first copy of Pride and Prejudice. In the letter, dated 29 January 1813, she writes: 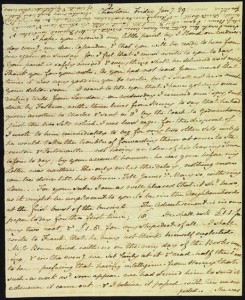 “I want to tell you I have got my own darling child from London. On Wednesday I received one copy, sent down by Falknor, with three lines from Henry to say that he had given another to Charles, & sent a 3d by the Coach to Godmersham; just the two sets which I was least eager for the disposal of.”

“I wrote to him immediately to beg for my two other Sets, unless he would take the trouble of forwarding them at once to Steventon & Portsmouth—not having an idea of his leaving Town before to day;—by your account however he was gone before my Letter was written. The only evil is the delay, nothing more can be done till his return.”

They have a special website set up as part of the celebration and have an interesting post  “Examining Pride and Prejudice through Letters.” How many authors do you think will have an examination of their work through email?