In the other side of my life, when I’m not writing letters, I write novels. My publisher has put an excerpt of my newest book up on the website and since Chapter two involves a great deal of mail, I thought that it might be something that you were interested in. 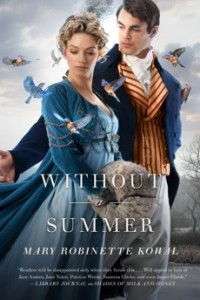 Jane entered the parlour carrying the morning mail, eager to show her husband the letter that they had received from London. She stopped in surprise in the doorway. The snow had ceased during the night, and the morning sun made a dazzling wave across the parlour. It cast Vincent’s form into severe relief as he stood next to the fireplace, scratching his back against the corner of the mantelpiece. His eyes were closed and his brow furrowed in concentration. In spite of his blue coat of superfine wool, tan trousers, and tall boots, Vincent looked like nothing so much as a bear come in for the winter. Jane half expected him to produce a honeycomb and begin eating it. She laughed, covering her mouth in delight at the image.

This book is set in 1816 and sending a letter in England was a little different than what we have here in the modern U.S.A. To start with, there were no envelopes. You folded the paper you wrote on to create your own envelope, then sealed it with wax.  There were several different ways of doing the folding, but here’s a tutorial on one version. 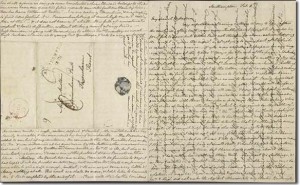 Postage was based, in part, on the number of sheets of paper. Because the person receiving the letter paid for it, courtesy demanded that you use as few sheets as possible. This resulted in “crossed letters” in which you turned the paper ninety degrees and continued writing across the existing lines of text. It’s easier to read than one might think.

If you lived in London, mail ran several times a day so you could exchange multiple letters with an individual via a sort of analog internet.

If you are interested in reading a sample of Without a Summer, my publisher has the first two chapters up on their website. Chapter two is chock full of mail.

4 thoughts on “Letters in the Regency, plus a sample of my new novel.”