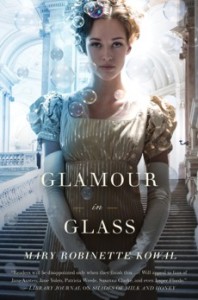 One of the things I was not expecting to enjoy about postal mail is the delay. I write something and then send it but it may be a day or a week before the recipient reads it. I think of it as writing to the future. Most of what I have to say won’t be news by the time my recipient gets it, particularly in the days of the internet, so what I’m recording is my reaction to the news.

It’s a time capsule of the moment, of my inner state.

That time-delay becomes particularly handy in my line of work when I am often given good news that I have to sit on. When you sell a novel or get an award nomination, it’s usually embargoed. So you usually have several days before you can tell anyone. I have discovered that writing letters to people satisfies my desire to tell them right now without violating any confidentiality agreements.

For instance — Several of you will be getting letters that contain the news that my novel, Glamour in Glass

, was just nominated for a Nebula award. You’ll get to see my messy enthusiasm captured in a tangible form. The news just became public today so what is contained in those letters will no longer be “news” but it will be a reflection of time.

In fact, I find that time delay to be useful not just with embargoed announcements but for maintaining a long conversation. There have been times when I’ve met a new friend and we have a flurry of fun email then the correspondence drops off because it’s so fast that there’s nothing new to say. Postal mail’s built in delay gives you time to restock on life so each time you write there actually is something new to talk about, even if it’s just your current state of mind.

How about you? Do you enjoy the time delay?

6 thoughts on “Day 20: Sharing News, the built in time-delay”