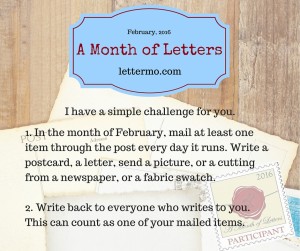 As we start off the fourth year of LetterMo, let me talk a bit about what I’ve learned about the Challenge.

It’s really not about getting letters, it’s about reaching out. A lot of folks sign up, hoping they’ll get mail. While that does happen, it’s ultimately not the goal of the challenge. The goal is to make a connection. If you get an email back, or a text, or a phone call, or a facebook/tweet/tumblr/thingie, then you’ve made a connection. That’s the important part.

An audience of one.  This month, I want you to slow down and really think about who you are writing to. So many other parts of our lives wind up being a performance because the internet (which I love) is a vast public space. Physical mail is intimate and designated for one person. Think about that person when you write.

It doesn’t have to be fancy. You know in December, when that first card arrives? There’s a moment of joy, because someone thought of you. The card maybe just has their signature, and it doesn’t matter that there’s not a fancy three page letter with perfect penmanship, because they thought about you. When the challenge says that you can send anything, we mean it. You’re mailing tangible proof that you thought about someone. That’s special enough.

It’s like time travel. No really, bear with me for a minute. When I write a letter, Present Me is writing to Future You. When you receive it, Present You is reading something from Past Me. So that means that what you are capturing with your mail is a specific, concrete moment in time. It’s okay to share the small details of that moment. For instance, as I’m writing this, my cat Sadie is curled up on the chair next to me. She’s snoring. I wish you could hear it, because it is adorable.

There is no wrong way. With the challenge a lot of people write to me. A LOT of people. I’ve seen things written in pencil on paper torn out of a notebook, letters typed on the computer and printed, incredibly gorgeous mail art, postcards with three words on them, and once, a pigeon. Every single one of those represents the moment when someone thought about me. I love them all. There’s no wrong way.  (I mean, besides the things that the federal government won’t allow you to mail. So don’t get arrested okay?)

Send mail to people who never get it. It’s tempting to just send to people who will answer you, but think about the folks who never get mail. Which brings me to the final thing, which is kind of weird. I’ll be here all month, writing along with you, but I have a favor. Don’t write to me this year. I know. It’s weird, right? Here’s the thing. I love getting your letters, but Rule 2 means that I have to respond to them. I realized that because of that, I’ve never had the real Month of Letters experience. This year, what I really want is to write to folks that probably aren’t going to write back to me, like my nephew and my aunt and my mentor and my friend with brain cancer and my favorite author and… you get the idea. BUT there a ton of people in the forums who want penpals. I get a lot of letters. Why not share the love and write to someone who doesn’t?

6 thoughts on “Welcome to the 2016 Month of Letters Challenge!”