If you are a writer seeking an agent AND participating in the Month of Letters Challenge, let me tell you about a neat thing. My agent, Jennifer Jackson, is offering to respond with letter to one randomly chosen query letter per business day. That’s right. A  personal response, mailed back with feedback on either the query itself or the concept of the novel.

In support of this endeavour, I am offering a special query letter #LetterMo. Due to the nature of this proposal, the kind and beneficent Mary Robinette Kowal has given me a variance on rule #2 (see official site here and sign up to participate in the challenge). I will only be responding to the queries received once and not engaging in additional correspondence (unless, of course, I request your manuscript).

I highly recommend Jenn as an agent. She’s been great with Shades of Milk and Honey and my other projects.

For full details, go over to The Month of Letters Challenge | Et in arcaedia, ego. And for heaven’s sake, read the guidelines.

Did you mail something yesterday? It was strangely exciting, wasn’t it.  I think it is the anticipation of knowing that the letter is in transit. Because I’m a fantasy writer, I think of it almost as the potentiality that starts when a magician casts a spell.

In another day or so, someone else will open their mail box and get a thrill of delight, which you caused. How is that not like magic?

Yes, yes, yes… we understand the mechanics of how the letter gets from Point A to Point B but that’s not the magic bit. What’s magic is that a simple act begun in one part of the world can create happiness at another time and another place.

Let me give a concrete example: I’m in Seattle right now, on a trip, and I’m sending a postcard to my husband even though I will beat it home today. It won’t say anything that I can’t say to him when I get there, but it will mark a point in time where I thought of him with a tangible marker.

That’s part of the magic.

When you write today, think about recording a moment in time. Cast a spell.

The Guardian has written an article, “Writers bid to revive letter-writing,” about the revival of letter writing. I’m interviewed about the Month of Letters Challenge along with Rumpus editor Stephen Elliot, and publisher Scott Pack who are also bringing back letter writing.

I know what you might be thinking… depending on where you are, it could still be January 31, but in Australia people are already starting to send their missives.

You can send anything. A letter, a postcard, a ticket from a movie you saw with a note jotted on the back… You can hold something in your hands, put it in a little box, and then somewhere else the person you were thinking of can hold the same thing. It’s sort of amazing, when you think about it. Sometimes starting the letter is difficult, but let me share with you some advice from Hill’s Manual of Business and Social Forms, published back in 1879.

The expression of language should as nearly as possible be the same as the writer would speak. A letter is but a talk on paper. The style of writing will depend upon the terms of intimacy existing between the parties… In your letter be yourself write as you would talk.

There is a tendency to overthink before putting pen to paper because it seems more permanent somehow than a computer screen. There is no delete key. Don’t fret. The letter you are sending will delight the recipient simply because you thought of them. The little bobbles simply prove that you are not a robot.

Be yourself.  Are you ready?

Participant Vicki Stephens created some Month of Letters Participant Stickers to show her correspondents that she’s taking part in the Challenge. What’s more, she’s making those stickers available to you through a .pdf download. You just need a sheet of sticker paper or regular paper and a gluestick.

Just a reminder, these are NOT postage. Please do not put them on the front of the letter so that the letter carriers aren’t confused. 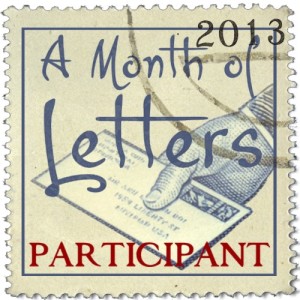 If you are writing to someone in the U.S. and don’t have their zipcode, or want to be super-helpful and use the ten-digit code, the USPS has a handy tool online for looking them up.

The royal mail has a similar service for the U.K.

If you are looking for a way to organize your Month of Letters Challenge, we have a calendar for you.

That was a brilliant idea, so I made a calendar page that you can print out to help plan your letter writing. (Oh, it’s not breaking the rules to send more than one thing a day.)

Download the Month of Letters Calendar for February, 2012 as a pdf. Thanks for the suggestion, Richelle.

“Never think, because you cannot easily write a letter, that it is better not to write at all. The most awkward note that can be imagined is better than none…” —Emily Post, 1922

Allow me confess that I am surprised, and delighted, by how many people seem to be excited by the Month of Letters challenge. I had thought that, if people seemed interested, that I would make a website for the challenge next year. La! Perhaps this year is a better idea.

However, that does mean that you are arriving at a website that is half-baked. I can see the need for a central location, but will need your help in understanding what the community needs. So stop in the Forums, poke around the tête-à-tête.

Oh, and get ready to send some mail.