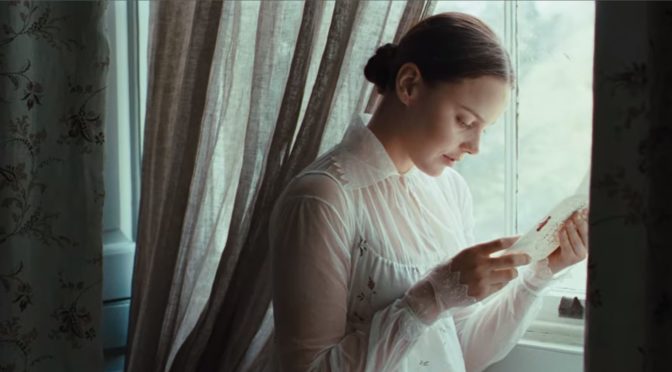 It’s 1818 in Hampstead Village on the outskirts of London. Poet Charles Brown lives in one half of a house, the Dilkes family the other. Through association with the Dilkes, the fatherless Brawne family knows Mr. Brown. Mr. Brown and the Brawne’s eldest daughter, Fanny, don’t like each other. She thinks him arrogant and rude; he feels that she’s a pretentious flirt, knowing only how to sew (admittedly well as she makes all her own fashionable clothes), and voicing opinions on subjects about which she knows nothing. Insecure struggling poet John Keats comes to live with his friend, Mr. Brown. Miss Brawne and Mr. Keats have a mutual attraction to each other, but their relationship is slow to develop, in part, since Mr. Brown does whatever he can to keep the two apart. Other obstacles face the couple, including their eventual overwhelming passion for each other clouding their view of what the other does, Mr. Keats’ struggling career, which offers him little in the way of monetary security (which will lead to Mrs. Brawne not giving consent for them to marry), and health issues which had earlier taken the life of Mr. Keats’ brother, Tom. – Huggo

Declaration by Letter. Its pivotal power defines and strengthens the storyline’s progression and drama. The detail and attention to letter writing is highly appreciated in this film.
The arrival and ritual

The envelope and construction

The writing and penmanship

The reply and response

The underpinning of Bright Star’s screenplay is rich on the transmission of letters, and of course, based on the romantic writings of Keats. More about his writing and correspondence to be found at http://keatslettersproject.com/.  There are many other historical, film, book, drama series, shows or movie examples. A great number of fantastic series to binge, too numerous to list, all set in the mid 1800s to early 1900s. In most plots, you will often see something by arriving by post. Lettermo members will pause at those scenes, to appreciate and ogle the paper, pen, ink, fold, style penmanship and addressing detail! (Recently watched the Duchess of Duke Street 1976-77 series and you can count the letters/desks/pens and stationery, from episode to episode!) From events, arrivals, announcements, invitations and important news, everything was predicated by the coming and going of a handwritten Letter. Letters of importance can start or end wars, be a hopeful beginning or a poignant end, both in fiction and real life.

There is a fundamental emphasis on letter writing in Bright Star, and the way it lends power to the storyline and development. Scripts, scenes, props and cinematography shots were created around the arrival, writing, placement and sending of the missives, posts, envelopes!

Mr. Charles Armitage Brown sent a flirty handcrafted Valentine to Fanny. It was in the shape of a suitcase, and when opened, revealed the message:

Darling Valentine,
I am not sure you should have a kiss for your amber enchantress eyes or a whipping. – Yours, the Suitcase

Fanny remarked in earlier conversation at the color of Mr Brown’s eyes, “being suitcase brown” (plain). The Valentine was an emotive and forward response for the time period, with a recognition of her wit and banter meant to get under her skin. This Valentine, sealed with a red wax heart, invoked jealousy from John Keats. He was furious that his friend would send a Valentine to his Lady, even though Brown sent it for his own selfish reasons – in order to discredit Fanny’s character as a well-suited match for John Keats. They were 20-somethings in 1819, so the hormones ran high, too!  How the sending and receiving of a slip of paper with a written message enraged and affected Keats, further demonstrates the importance of letter writing!  It framed the expression of Love between John and Fanny in future scenes, letter excerpts included. His poetic pinings for her can make your heart swell! So young, and so well expressed in written form and poetry, you can imagine if Keats lived beyond 25, how masterful and powerful his creations would have become. #letterlocking #vintagevalentine

Another thing to be noted is how Mr Brown constructed theSuitcase Valentine. Crafted on a diagonal perspective, it opened just like a chest or case; a 19th century 3D Effect! Some time and thought went into it, hand drawn and colored too! Perhaps a mail artist would appreciate its simple but effective design! The attention to small detail in paper, pen, construction and style is appreciated in this century. #mailart

In today’s world, a letter written with attention to its recipient can be just as meaningful and powerful, hopefully without fits of jealousy or fireplace burning! Finding a penpal in the 21st century is rare and therefore more cherished. You can find some of these great humans, the like-minded and letter-laden spirits, here at lettermo.com.  Even a few short friendly sentences on a card to a friend or loved one can brighten the spirit, inspire and bring a nostalgic comfort. The investment of the letter writer’s time is the highest value in a Letter! It is a compliment and a recognition of you personally. Your letter is truly a gift, created especially for you. I hope humanity does not lose the beautiful process and the appreciation of a Letter’s value. We need only look to the wonderful writers of the 19th Century: Bronte, Emerson, Whitman and Keats, made masters by what they chose to put down on paper, and send out to the world.

Seek out inspiration from poets, writers, filmmakers like Jane Campion, your fellow Letter enthusiasts and penpals. They can cure writer’s block, or give you an idea about how you want to convey something. It is enriching to read their words, or watch their creations, and allow them to inspire your own letter-writing content and individual style.

“When I don’t hear from him, it’s as if I’ve died, as if the air is sucked out from my lungs, and I am left desolate, but when I receive a letter, I know our World is real. It’s the one I care for.” – Fanny Brawne (while clinging to the letter)

Gear up to send yours out to the world for The Month of Letters 2022 LetterMo22 – A whole two centuries after Keats wrote his!! Bonus if you have those nice wax seals! #lettermo #lettermo22 post your images and give the world your time-wise words. (incoherent musings, late replies, bags of tea, and poetic inclusion’s count too!)